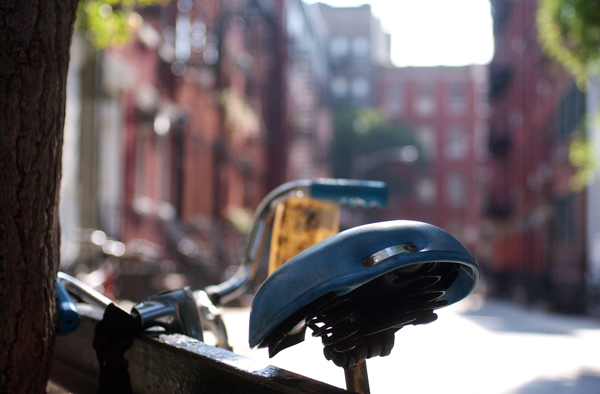 I’d spent much of the day wandering the villages.

As I walked from the West Village to Union Square to catch the NRQ, I chatted with Phil on the phone, bypassing plenty of promising visuals — a neat building here, a charming cafe there. My pictures from the day had been disappointing, and I didn’t have the energy to attempt further.

Then, there she was.

Looking up to cross the street, I’d spotted a petite woman to my left walking toward me. “That looks like…” I thought, staring just a second too long.

Fake celebrity sightings are wondrous for that second before reality hits. Before the person gives you a proper view of his nameless face; before she speaks in an accent reserved for much too distant lands; before he insists, “No, I’m not Justin fucking Timberlake. Now, give me back my shirt.”

In this case, there was no mistaking the stranger. Sure, instead of Manolos, she wore sneakers. And instead of a Patricia Fields concoction, she had on an ensemble so regular I can’t remember whether she wore jeans or gray capris. What gave her away, though, was her hair — blond and frizzy free — and that strut, a strut recognizable only to the legions of avid worshipers of a now-defunct show seriously marred by ill-conceived movies. Digressions aside, that suddenly didn’t matter. After all, I was crossing paths with Carrie Bradshaw herself.

New Yorkers are known for being aloof in situations that otherwise would be cause for concern. Homeless man bleeding to death on the street? Mugging in broad daylight? An impromptu a capella performance on the train? All just another ho-hum day in the city, and being in the presence of celebrities is no different.

I’ve often wondered how many I pass on a daily basis, as I’m usually too engrossed in my own inconsequential goings-on to pay attention. Unlike New Yorkers, however, I am unable to brush off such encounters when I do have them. There was that time I ran into Artie from “Glee” on a busy SoHo sidewalk. “Hey!” I said to him, my arm outstretched as if serving a platter. “Hey!” he said, smiling. Instant homies. Then there was the time outside a restaurant on the Lower East Side, where Phil and I saw that Joey Fatone lookalike from “Project Runway” whose name we couldn’t remember and dared not ask, especially because he was yelling obscenities about something or other. We resorted to shameless gawking.

Perhaps the gravest transgression I committed of the Stay Cool Around Celebrities Rule involved Katie Holmes. Let me preface this by saying it occurred before I moved to the city, so it shouldn’t be held against me. In fact, I was in town looking at my future apartment, so I was very much Tourist Girl Unaware of Unspoken Rule (TGUUR in subsequent references).

It was an alcohol-fueled night on the LES, and a few friends and I were on our last legs, standing around  trying to figure out where to go next. We watched two vehicles — a truck pulling a car — stop just in front of us at a red light. On the passenger side of the second vehicle sat Mrs. Cruise, her bob largely hidden by a hat. A cameraman hovered just above her. A typical New Yorker, observing the SCAC rule, would continue on her way, frustrated by the obstruction Katie Holmes’ brigade was causing in hailing a cab home. But I, a TGUUR, could not control my impulses.

I ran to the middle of the street wielding my point-and-shoot and, inches from her face, gleefully snapped away. “Your flash is ruining our shot,” said the cameraman. “Please stop.” A few defiant snaps later, I walked back to the sidewalk, extremely proud of my brief foray into paparazzi-dom — the epitome of embarrassing TGUURs everywhere.

This time, within an arm’s reach of Carrie Bradshaw and without the mystical powers of alcohol to guide me, I engaged in no such tomfoolery. It was just me and her on that island; my heart stopped.

Should I take a picture? I wondered.

Give her a hug?

Before I could reconcile my conflicting thoughts (Act cool! Take a picture! Wave awkwardly!), she’d already crossed the street.

Not quite the cool indifference of a New Yorker, but some progress nonetheless.

FOOTNOTES back to post
[1] He later told me he thought I’d gotten mugged by how abruptly and how long I’d stopped talking.