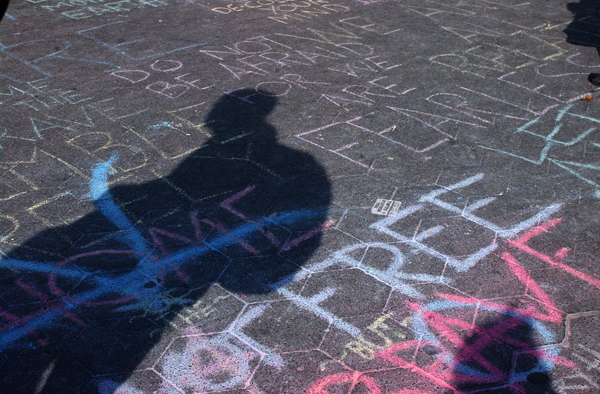 Lurking is one of my favorite pastimes.

Sure, it’s often associated with creepiness, what with it also being the favorite pastime of shady characters with hooks for hands, red feathery sombreros and slender yet pointy mustaches. Sure, you’re probably tempted to follow up each mention with “in the shadows.”

But lurking isn’t exclusively for dastardly deeds. It can even happen on a gorgeous afternoon. Saturday was one of those days.

Before I go on, let me preface this by saying it almost didn’t happen. I’d spent much of the morning lounging and reading and surfing (the dry land interwebs kind) that by the time I was ready to go exploring, it was well into the afternoon.

No matter, I thought. It was time to dust off the good ol’ DSLR, charge the batteries, and head on out.

The charger. Where was the charger? Not in the usual spots – the camera bag, on my desk, under my desk, under the bed, in the overhead closet, on the bottom right corner of the closet. It wasn’t in the common rooms or common closets or common nooks behind the couch.

Forty-five minutes of fruitless searching later, I panicked. I CAN’T GO ON. MY BLOG WILL CEASE TO EXIST. AND WITH IT MY WILL TO WRITE AND LIVE AND STUFF.

I then decided to do the next most logical thing. I would research DSLRs online, go to Best Buy, buy a new camera despite not having the funds for it, take pictures and somehow do it all before it was supposed to rain. In two hours.

And then I realized that was impossible. So I panicked some more.

As a last resort, I consulted one of the most amazing tools in reconnecting the dots of my scattered existence: my blog.

I knew the last time I traveled with the camera was here. The charger, I surmised, was either at the beach house or inside the cold, heartless depths of the bin that is airport security.

But then I also knew I charged my batteries right before doing this. Which meant the charger had to be in the apartment somewhere.

And then, I knew.

Looking back, it was quite elementary, my dear reader. The charger, I realized, was clearly on the left side of the closet, next to the ironing board, under a mound of sweaters I hadn’t worn in years and probably never will again.

The lurk was on.

I’m often asked (by my imaginary readers) just how to effectively lurk. I’m by no means a professional, but I’ve spent enough time creeping about to dish out some words of lurkdom. It’s actually very much like walking, which we all do in varying degrees day to day. What sets it apart from snapping a picture on the way to something is there’s intentional exploration involved. That’s where it gets a little less comfortable. Instead of nonchalantly snapping pictures on the way to something, this IS the something you’re walking to. It adds a bit of pressure and an element of “Oh man, am I doing this right?” You’re probably not. Because there isn’t one right way to do this.

The best thing to do is not to over think it. Here are some things that have helped me.

To effectively lurk, you must be incognito. So, put down your multicolored jeggings for now. It’s all about blending in. As for me, I wore the New Yorker uniform: black sweater, black jeans, black flats and black backpack. 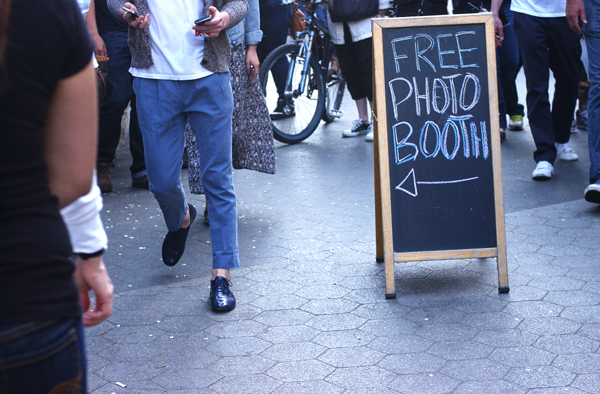 Be flexible. The original plan was to gett off at Union Square and walk about 15 minutes to a coffee shop in East Village. But when I emerged from underground, there was so much activity there I stayed.

Observe. I honed this through reporting and from watching the photographers at the local papers I worked for. I must admit that blending in is much easier just with a notepad and a pen. With a camera, people get nervous. Sometimes they want to engage. It’s useful for a little bit of color, but sometimes it results in awkward pictures. I find that it helps to linger long enough for people to stop caring you’re there.

Observing means taking note of the little things. Just because there are 50 people taking pictures in the same place doesn’t mean you will all end up with the same pictures. I like to find funny or non-obvious things, preferably with people in it. I didn’t notice this until after I’d uploaded the picture, but this egg-grabber had bloody fingers.

Color is also neat. And don’t be afraid to get in people’s faces. I’m short, so I often get a lot of people’s backs and limbs in my shots. I don’t mind it, though. It adds movement and an insight into the plight of the vertically challenged. 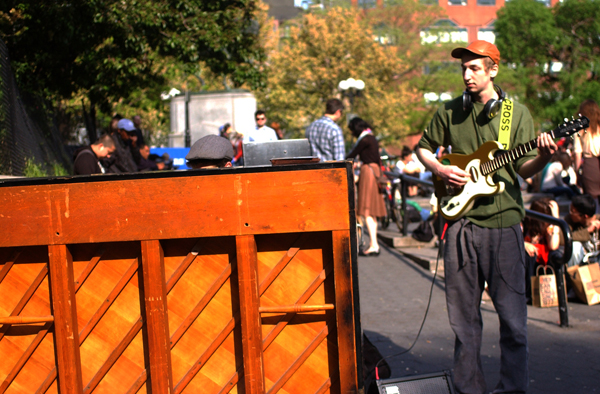 Sounds are important. I wasn’t in the mood to talk that day, so I wore headphones without actually listening to anything. It’s useful for keeping some sort of distance between you and the subjects, and it also gives people the impression you’re not really listening to whatever they’re saying. Conversations are interesting. In New York, people are used to eavesdroppers and eavesdropping (One guy: “They inject it in your stomach?” Gross.).

The pianist, after a song: “We just met today. He got here two minutes ago.”

Be friendly. Maybe it helps I look 12 and harmless, but I find people are receptive to smiles. New York might be the exception in that people are used to having cameras around, especially on Union Square near the film school. In the event someone does say, “Get outta my face, you picture-taking chipmunk,” just admit defeat, put the camera down and slink off. The good news is, I haven’t had too many of those.

Be confident. The guy on the left actually gave me the death stare after I snapped this picture. He wasn’t having it. So, I did what any normal little person would do in the face of imminent danger. I stood next to him. He dared not look at me like that again.

I’d seen this guy before. Matthew Silver the Great Performer works for the universe.

Finally, just shoot. They say the best camera is the one you have with you (which explains why I’ve been Instagramming everything), but the DSLR has its purpose. I love its quickness and versatility. I love pretending I’m on a super important photo expedition somewhere exotic. I still get nervous when I pick up the DSLR for the first time in a long time. It takes a while to get confident with it. When this happens, I find the best thing to do is to survey the area, walk around, take a deep breath and just shoot.