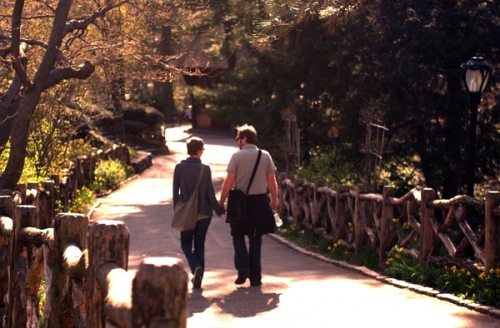 You can tell a lot about a couple by the way they cross the street.

On Saturday, I witnessed four coupled-up street-crossers in the span of about 30 minutes. That’s what happens when you’re strolling down Fifth Ave in search of the perfect suit.

(The suit wasn’t for me, by the way. I spent most of the shopping portion of the day reading on the so-called boyfriend chair.)

On Saturdays, Fifth Avenue becomes a fashionable version of football. The teams are shoppers decked in their best leopard print ensembles, sizing each other up from opposite sidewalks. The “walk” sign flashes, and each team – a herd of maybe 20 or so – must reach the other side in the time allotted with little injury.

You must be ruthless. Standing between you and the end zone are a clueless tourist pointing at the sky, a mom who refuses to carry her barely mobile toddler, a grandpa recovering from a hip replacement. An elbow here, a jab to the ribs there. All’s fair in the sport of crosswalk.

Further, you must be prepared for the unforeseen. A stiletto-wearer might step into a crack or a carriage-carting horse might sideswipe a straggler.

Most interesting is how people reveal their true selves in the face of possible death by cab. In most cases, they will fall under one of two categories: Leave No Man Behind or It’s Every Man For Himself.

It is in that split-second decision that the couple is put to the test.

At Crosswalk No. 1, I watched a man cross just as the light turned green. Behind him, his wife or girlfriend was just stepping off the sidewalk. She was on the phone. She stopped.

But it was too late. The man was almost across the street, barely acknowledging her.

At Crosswalk No. 2, another possible death by cab. This time, the woman was stepping out into the street just as the light turned green. She wasn’t looking. The man, waiting with the rest of us, reached out to pull her back.

As cars passed, they looked at each other, she with the sheepish “Oops” face, and he visibly annoyed.

At Crosswalk No. 3, the couple was hand in hand. They stepped out into the street together, confident the cabs were going to stop for them. They kept talking, never missing a beat.

At the fourth crosswalk, the couple was in the midst of conversation. A cab approached, but there was enough time to get to the other side. The woman darted across the street; the man hesitated.

It’s likely I’m looking too far into this. (Lucky for you, dear reader, I’m a fervent too-far-into-this-looker who likes to inject stories where they may not belong. As for the rest of you.)

Where the rest of you might see a man who saved a woman from certain doom, I see a woman so used to the man shielding her that she doesn’t even bother to look both ways anymore.

After all, relationships are made of little crosswalks. They are unpredictable. They are risky. You never know if, in the face of adversity, the person you’re with is going to look out for you or leave you behind.

Which makes it all the more frustrating. I mean, life would be so much easier if we could employ a reliable test to gauge a person’s crosswalk mettle. Like: Hey, you, let’s meet at a crosswalk, where I will close my eyes, step out into the street and, though I will not tell you this beforehand, you will pass my test by making sure we both make it to the other side.

But that’s not exactly foolproof. For one thing, you could be crushed by an overzealous texter should your mate be distracted by a unicyclist, a no-pants-wearer, a Uniqlo of epic proportions.

The more accurate measure, I think, is the one taken over time, time and time again. Because should you both survive one crosswalk mostly unscathed, albeit clumsily, there’s always the next one.

And maybe, hopefully that one will be a hand-in-hand kind of thing.