“We should plan tomorrow better.”

We’d breezed through Kensington Market, a neighborhood in Toronto known for its diverse population, restaurants and nooks, and were in the midst of doing the same to Queen Street West. There went a bookstore, an art gallery, and so on, until we’d passed so many they might as well have been the same. My camera dangled from my right shoulder, unused, as my friend S. told me one of her detailed stories.

S. talks quickly without pausing. A simple question never gets a simple answer, as an inquiry of “Where’d you get that skirt?” can turn into a narrative of her particular mood the morning she might have bought the skirt, how her eyes might have been puffy from forgetting to take Claritin the night before, that the skirt she wore that day ripped from old age, and, after eating a grilled cheese sandwich, she saw an H&M, pulled over and…

“I think we’re going the wrong way,” she said.

Sure enough, she’d read the map upside down. We had to turn around. Our day had consisted of walking through neighborhoods in a city of neighborhoods without really taking them in. I knew we were in trouble seconds after arriving at Kensington Market, when I looked up from my camera to see S. standing a few feet ahead of me, waiting.

Taking a picture often demands that its taker and subject be comfortable. I felt rushed, watched. She hovered.

“We should plan tomorrow better,” she said.

In my mind, the day was well planned. We’d visit two of Toronto’s vibrant areas and go from there. I’d missed her and another friend’s Niagara Falls excursion because I’d come a day too late, and we’d saved museums for another day. But without a singular popular landmark to focus on, it soon became clear we had different views about travel.

Though I usually pick a few landmarks to see, I also leave enough time to wander and document anything that interests me. This really evolved from my trips as a broke college student, when I was forced to be creative with my time and money. I rarely buy anything aside from a few trinkets or inexpensive jewelery; my pictures are my souvenirs. While I’m an observer of life, S. is an active member. She loves to talk, absorb the nightlife, and be the subject of photos, not take them.  She tells intricate stories; I listen. We get along because we don’t take ourselves too seriously, as our conversations often culminate in fits of laughter, mostly hers.

That afternoon I decided to put down the camera and see things her way. I tried to get lost in her stories, all the while inhibiting that gut instinct to document. I passed by much of Chinatown without taking a picture. There were many images, colorful ones, but I don’t remember them. I walked, she talked, and we missed everything in between.

When we got back to the hotel, we plopped down on our beds and opened our laptops. I wasn’t happy with the few pictures I had. I document things, I thought. It’s why I became a journalist. I’ve kept journals since I was 8, had cameras since I was 10, and once I learned I could publish my thoughts online, kept a blog at 14.

I looked at the time — our friend was due to return from her conference in an hour. I rolled out of bed, grabbed my camera and a map.

“I’ll be back,” I said, not really sure where I was headed.

I exited the hotel and turned right.

Tons of color and character on Spadina.

We didn’t figure out how to pronounce Spadina (spa DYE na) until a few days into the trip.

Kensington Market, one of Toronto’s most famous neighborhoods.

Mesmerized by the creepy bunny. Inside, there was another. 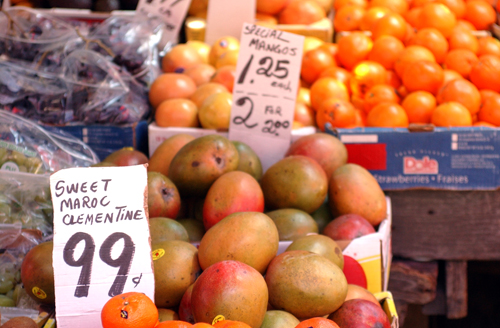 Here we met a nice Torontonian who gave me a rundown of the best coffee shops in town, naturally.

Anything but a white picket fence.

Something gritty, something neat. 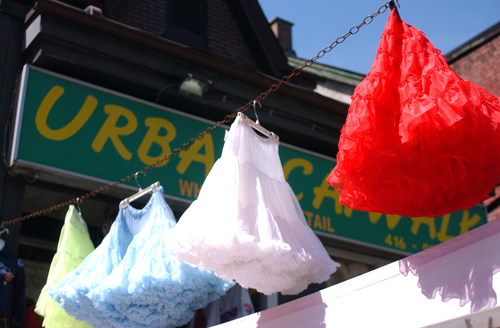 Perfect for frolicking in a meadow.

On Queen Street West, we came across this contraption.
A sign on the door said no one under 18 allowed.

6 thoughts on “The Art of Undocumenting”